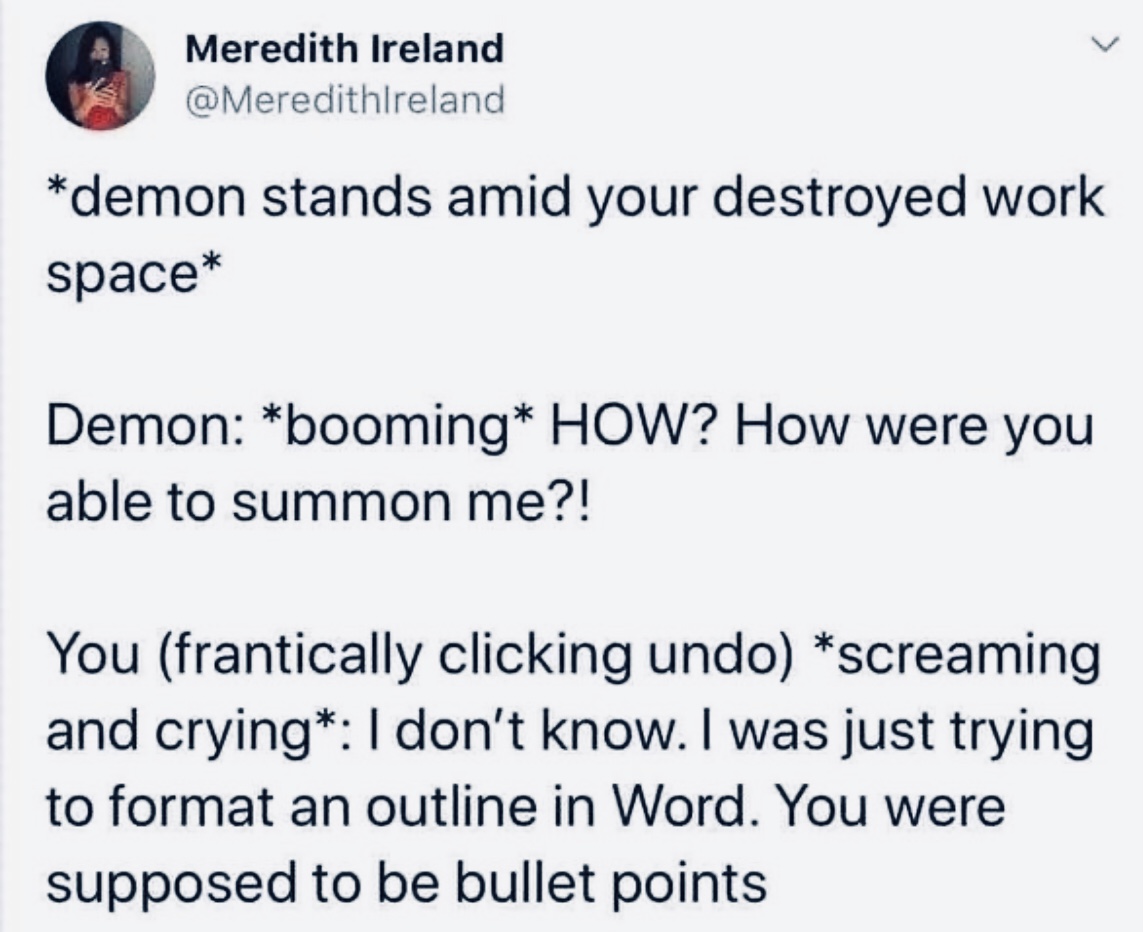 This story is a bit silly, but brought to you by some friends who challenged me to turn the meme into a story. The same friends who later pushed me to make the succubus asexual, and the same friends that inspired the name of said succubus. They’re to blame.

The Writer and the Succubus

It’d been a long night of writing at my desk, and I couldn’t get this last revision to sit right. Microsoft Word is, and always has been, a sadist in its own right; a gaslighting piece of technology that curses all that dare challenge it. Of course, I didn’t expect my trials and tribulations to summon a demon but, you know, nothing surprises me anymore.

“Why hath thou summoned me, mortal?” The demon boomed through my one-bedroom apartment, their voice shaking the little figurines on my desk and waking the baby next door through the paper thin walls.

“Well, you see, I was trying to format this document to meet the submission guidelines and...” I trailed off after meeting the demon’s eyes. They had a vibrant, but gentle glow to them and all I wanted in that moment was to stare into those wells of sparkling liquid until they consumed my soul.

Wait a second. This isn’t right. The demon of Microsoft Word is not consuming my mortal soul tonight. Something doesn’t make sense.

“Wait, what kind of demon are you exactly?” I asked rather boldly considering my predicament. I’d read enough demon slash fic to know that regular, run-of-the-mill, angry demons wouldn’t be nearly as endearing. Why would Satan, of all beings, lure humanity to hell with cute little puppy eyes?

“I’m a Succubus. Sort of.” The demon looked down at their feet, kicking the non-existent dirt across the floor as if someone had stolen their immortal hellhound and taken it to Disney World.

“Sort of? What does that even mean?”

“I’m a Succubus, but... I’m not into that stuff I just want to take long walks by the water, maybe get some ice cream, cuddle by the fires of Hell...”

I could tell that my nonplus response was disappointing but expected; the succubus went back to floor gazing and I almost felt bad for them. Imagine being summoned by accident and then being painted as less because you weren’t normal. I’d been there before.

“Well, I guess you’ll be here for a while, so I’ll have to find something to call you. Let’s see... demon summoned by Microsoft Word who just wants to cudd—“

“They call me Klopp in the underworld, but my summoners call me Clippy.”

“Contentment, satisfaction, praise... Basically, every human emotion that is positive. You summoned me which means that your emotions are intertwined with my sustenance.”

Klopp’s eyes locked with mine; their deep burning abyss baring my soul. I knew looking away was probably the right choice, but it's not every day you meet a being that thrives on your happiness. I shook my head and turned back to my document at my computer.

“Would you happen to be able to fix my formatting here? I mean, that’s kind of why I accidentally summoned you. See, the margin on this unordered list is just wrong.”

Klopp bit their lip, looked to me, and then to the document. “It looks like you’re trying to write a letter. Would you like me to help?”